At least one version of the Korean creation myth of Tangun describes "devotion to the welfare of mankind" or hongik ingan as one of the reasons that Hwanung, Tangun's father, descended from heaven and took residence in the world of man. Lee Hyun-hee et al. (p. 48) note that Hwanung "came to this world in order to serve the people, not to receive respect or worship, nor to rule." They then go on (p. 49) to stress that ancient Koreans considered harmony to be important.

Other readings for this week seem to add to this theme that Korean society was close-knit (even after the development of iron tools led to societal change), and placed great value on harmony. One reading notes that relations within Korean society, even between groups one would expect to be antagonistic, such as landlords and peasants, were relatively harmonious. It notes that Korean history stands in contrast to that of China, which was marked by continuous strife between landlords and peasants, and recurrent peasant uprisings.

Prior to beginning formal study of Korea (this course), (correct or not) I'd also had the distinct impression that, because of Confucian and Asian values, Korean society was relatively close-knit, socially conservative, and placed great emphasis on familial ties. (vague and generalistic, I know)

With this as a background, and as someone interested in the effects modernization has on societies, I read with great interest this CNN/AP piece on a South Korean psychiatrist, Dr. Lee Hong-shick, affiliated with Yonsei University, who founded the Korean Association for Suicide Prevention in an attempt to address the incomplete care suicidal patients had been receiving (many were treated and sent home without follow up care).

The article quotes statistics from the Organization for Economic Cooperation and Development (OECD) that put the rate of suicides in South Korea at 24.7 per 100,000 people in 2005. By their reckoning, this figure gives the South the highest suicide rate in the world (as of 2005; it compares the South's 2005 figure with 2002/2003 figures for Japan and the US that list Japan at 20.3 suicides per 100,000 people and the US at 10.2 per 100,000.) It adds that the South's National Police Agency has released a report stating that "suicide is the leading cause of death for South Koreans in their 20s and 30s."

The CNN/AP article then theorizes as to why suicide has become so common in South Korea, offering commonly heard explanations tied to 1) stress related to modernization, economic development, and the pressure to succeed in life, 2) an increasingly weak family/social support system, and 3) the role of the Internet in exacerbating this trend (making information on suicide easily accessible)

The report ends with a brief note that some are calling for comprehensive approaches from the South Korean government to address the issue, including counseling. Although the theories offered to explain the phenomenon seem reasonable, similar pressures are felt in many societies, but don't result in such high suicide rates. I wonder what is it about modern Korean society in particular that makes Koreans more open or vulnerable to suicidal tendencies? What is fueling or exacerbating this trend? Does the answer lie in the influence of traditional values, modern dilemmas, or how the two clash? Anyway, given the emphasis on harmony and social responsibility noted above, I'm interested to see what South Koreans themselves see as the primary reasons behind this troubling trend and to see what Korea does, as a society, to address the issue.
Posted by jap chae at 9:12 AM

I've gotten the impression from what little contact I've had with South Koreans that many of them suffer from a feeling of inferiority. I don't know if this is true, but there was a recent worldwide poll (though no telling how good the methodology was) that indicated South Koreans had a very low sense of national pride. I wonder if this could be connected to the suicide rate? 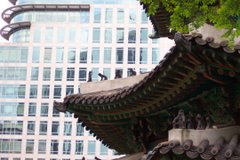